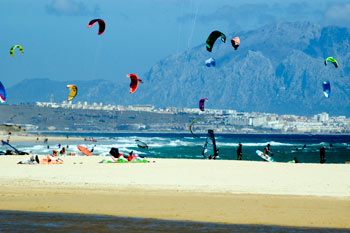 Tarifa is not for the faint-hearted. High-energy and hipped-out, it attracts a unique mix of the flip-flop crew; those who like their fun 24/7 and full on. Ranked third after Hawaii and the Canary Islands as a top wind spot, it is a Mecca for wind and kite surfers from all over the world. You won’t find many sun-worshippers here idly cluttering up the beach. It’s much more likely to be the sky that’s cluttered; lit up like a circus by scores of multi-coloured kites in flight. That’s not to say Tarifa is not worth a visit for the beaches alone. As one of the few coastlines in Spain unspoilt by development, it boasts some of the most beautiful beaches in Europe.

But Tarifa is much more than a haven for surfer dudes and beach bums. It’s billed as Spain’s favourite party place and during the months of July and August plays host to hoards of Spanish, French and Italian revellers. The town’s old-world infrastructure barely copes with the influx making May and September the nicest months to visit. 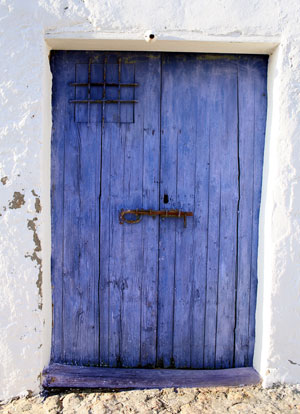 A mythical energy encircles Tarifa. This is a town that trades on duplicity, where everything comes in pairs. Two winds, Levante, a hot heavy wind from the Sahara and Poniente, a cold wind that blows in from the Atlantic. Two oceans, Mediterranean and Atlantic. Two histories, Moorish and Christian. Two continents, Europe and Africa. Standing on any of Tarifa’s beautiful beaches marvelling at the splendid wonder of the Moroccan coastline with Mount Jebel Musa rising up behind Tangier and the Rock of Gibraltar to your left, the fabled landmarks that mark the Pillars of Hercules, any visitor is powerfully reminded that they have reached a crossroads in history. In ancient Greek and Roman times, this spot marked the edge of the world for seafarers and travel beyond it promised certain death, they believed. 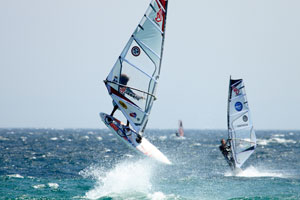 In the last fifteen years or so, Tarifa has reincarnated as a surfer’s paradise. Throughout the year, but especially during the summer months, scores of wind seekers flock to these shores assured of a constant gust to lift their sails and their spirits. Particular stretches of the four mile long sandy white beach, which runs perpendicular to Tarifa town, are dedicated to kite and windsurfing. Playa (beach) Los Lances and Playa Valdequeros are the two main spots and many of the surf schools are based here. The international names include Fanatic and Mistral operating alongside local ventures such as Tarifa Smile and Spin Out. There is no shortage of instructors or equipment for hire and a three-day surf session including lessons costs about 250 euros.

Tarifa’s beach runs until Punto Paloma where majestic dunes protect bathers from Levante, whilst also providing a matrix of secluded alcoves, which the naturists take advantage of. Just past Tarifa is Bologna, a tiny village that was once home to a thriving Roman port town. The beach here has been excavated and provides a tangible glimpse into the past life of the ancients. Los Canos de Meca is another beach town, about twenty minutes drive from Tarifa, and is a hippy hangout where earthy hostels serve up hearty ethnic cooking to carefree dread-locked new aged travellers. 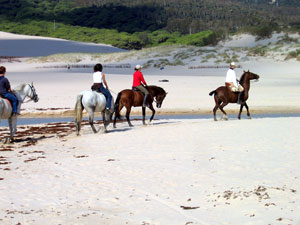 If the idea of surfing doesn’t float your boat, there are plenty of other activities to get you in the water; scuba-diving, open sea fishing, sailing and whale watching. Horse-riding is also an option and a beautiful way to spend an afternoon. Cycling, climbing, cave exploring, paintball and quad biking are also available to satiate the adrenalin junkies out there. But if it’s a spot of lunch or simply a relaxing glass of wine that you fancy, then head for Spin Out’s beach bar on Playa Valdevaqueros for the best salad spread in town or Arte Vida at Playa Los Lances, a hip and chilled out beach bar with oversized white cushioned sofas, perfect for watching the sun go down. 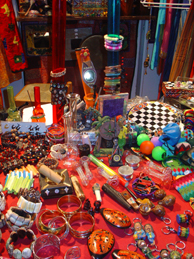 Back in town shopping, eating and drinking are the activities of choice. There are enough shops, restaurants and bars to cater for every fashion trend, taste bud and tipple. On Tarifa’s main street the designer sportswear outlets are numerous and generally overpriced but if your bank balance will allow it, they sell some really funky beach and sports gear. In the old part of town, within the castle walls that are more than 900 years old, the truly diverse nature of the Tarifa comes to life. Here, the whitewashed walls of the Arabian influenced buildings shimmer in the midday sun. Narrow, winding streets with cobbled paths spill out into a labyrinth of magical alleyways. Here, bijoux jewellery shops, ethnic clothing boutiques, Moroccan craft ware stalls and designer interior furnishings stores sit nicely next door to wholesome health food cafes and psychedelic al fresco bars.

Tarifa’s nightlife is as forceful as the winds which blow through it. Dinner is served late and restaurants are plenty. Traditional Spanish, French cuisine, Argentinean barbeque and Italian pizza are just some of the succulent menu options. The party zone begins at C/San Francisco in the old town and is a mixture of hideaways, crazy hangouts and pumping hotspots. High on the list of popularity is Soul Café and La Ruina, both located in the old castle walls, they cheekily mix history with hedonism.

No other coastal destination in Spain can match the hectic history, accelerated activity, food fare or party pull of Tarifa. These are just some of the reasons that make Tarifa a special spot on the Costa de la Luz.