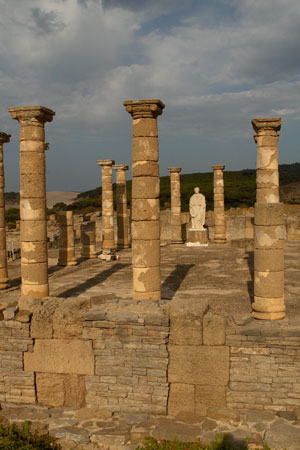 The long sandy beaches that extend westwards from Tarifa form an almost unbroken continuum of white sand and blue sea that stretches all the way to Cádiz.

At Bolonia, some 15 kilometres west of Tarifa, this scenery forms the dramatic backdrop for one of Spain's finest Roman archaeological sites. Tucked right up against the sandy shores of Bolonia, Baelo Claudia, with its graceful ruins gently set amid the peace and natural beauty of dunes and beach, exudes an atmosphere of serenity and contemplation, yet in Roman times it was a bustling hive of activity. 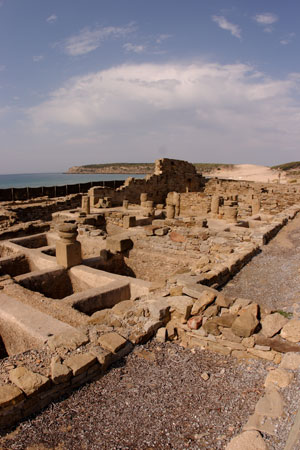 From the first century BC onwards, Baelo Claudia grew into an important Roman settlement, complete with villas, squares and temples. The nearby sea was the source of the town's prosperity, providing the tuna, sardines and other fish that were processed at its large salting works and exported across the length and breadth of the known world. In these idyllic surroundings Romans and Iberians alike enjoyed a highly civilised and prosperous existence until the fall of the Roman Empire caused its decline and the Moorish invasion its abandonment.

For almost 12 centuries, the temples and villas of Baelo Claudia lay covered in soil, vegetation and sand, but since it was rediscovered by a French archaeologist at the turn of the 20th century, the columns, statues, busts and mosaics of this former Roman port can once again be admired. The peaceful surroundings in which they have found their final resting place, meanwhile, offer a perfect setting in which to contemplate the mysterious charm of a vanished civilisation.